I want to believe 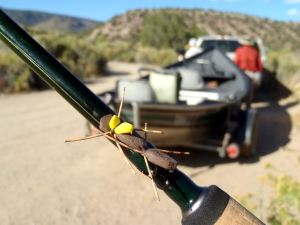 First buddy: call him Bret. He’s a devout adherent of a fly pattern he calls the Blood Nymph. The fly and its name have yet to enter common usage, so I’m not sure where to send you for the recipe or even a photo. I’ll say it’s got a tungsten bead head, collar of red silk, black thread body (tapered), and a red wire rib. The wing is a pair of white biots, the tail a pair of black biots. No dubbing, no hackle. This on a scud hook size 12 down to 16. Picture a severely malnourished Prince Nymph with a bead head, or maybe a Zebra Nymph wearing a tuxedo. Nothing elaborate, but it catches fish. I have seen the Blood Nymph save Bret from blank days and I have seen it outfish other flies three fish to one. Bret catches trout of all varieties on this fly in every season from practically every waterway in Cache Valley and beyond into Wyoming and Montana. When I hold a Blood Nymph in my palm, I half expect it to emit a mystical humming or maybe a faint glow, like Frodo’s sword in The Lord of the Rings.

Second buddy: call him Jeff. While fishing on the Blacksmith Fork the other day Jeff showed me a fly he’s been fishing lately. He wasn’t supposed to show it to me; he swore to one of his other fishing buddies he wouldn’t. The way Jeff tells it, he had to sign some documents in the presence of a Notary before his friend would let him see this fly, and I picture shot glasses and vodka to solemnize the occasion. Only after Jeff ushered me to the middle of the stream, where the noise of current and tittering kingfishers covered our voices, would he show me the fly, which for legal reasons I cannot describe here. Jeff looked around, checked to see that not so much as a beaver was listening, and said, “I’ve caught fish every time I’ve used it.”

This is your basic fly angler—as superstitious as a New England villager at a witch trial. Lucky hat, lucky rod, streamside rituals, talismans. Do we believe in magic? No. Actually, we spend a lot of time trying not think about why things work. Bret’s Blood Nymph catches fish and so does Jeff’s fly. They’re not sure why; they don’t want to know why. If they knew I was writing this they’d say, “Quit, dude. You’ll jinx it.”

It may not be magic, but the real reasons aren’t exactly rational. Is Bret’s Blood Nymph deadly because it’s perfectly conceived? Does it so resemble actual aquatic forage a trout can’t resist striking? No, that can’t be it because Jeff’s top secret fly looks like something one of my kids tied using the debris swirling around under my fly bench.

It’s not magic and it’s not some form of perfection. It’s something a lot harder to come by: confidence. For whatever reason, certain flies engender our confidence. Maybe this fly hooked me a big fish one time. Maybe that pattern was passed down by a mentor. Whatever; that part doesn’t matter. What matters is that when I fish with confidence, I fish better. I fish diligently. I fish in the zone.

In a way, Jeff and Bret are right. You can jinx it. Subvert your confidence and it’s over—go back to the truck, head home, and watch TV. Because you’re always moving toward the zone or away from it. It’s hard to stay in one place, but when you have confidence in your fly, you’re at least moving in the right direction.

If I could figure out how to fish all my tackle with complete confidence, I guess I could fish in the zone at will. For now I’m satisfied with the occasional magic fly. Right now mine is the Surveyor, size 12 or 14, with pink crystal dubbing, purple hotspot, and a silver tungsten bead head. This fly catches fish, period. It has saved me from blank days and has fished well all over the valley. On the Logan River a few weeks ago the Surveyor pulled three fish from a single bucket-sized hole, almost on consecutive casts. In a few weeks or six months, something will change, and the Surveyor will return to its status as an ordinary fly, a mortal fly, pinned between my Hare’s Ear Nymphs and Pheasant Tails.

Until then, if it isn’t magic, it’s close enough.

One thought on “I want to believe”