We here at How Small A Trout promise to have some new and fantastic content to post real soon. Russ got a new vice for Christmas! There must be a post in there, somewhere. And surely Chadd has something new to say, too.

For now, we got another article published at Eat Sleep Fish. Please click over there and check out photos and an essay by Chadd (which of course features Russ) about winter fly fishing. And not to strain our arms patting ourselves on the back, but the guys at ESF liked the piece so much they ran it as the lead article. This makes it really easy to find.

We’re also including a couple of the photos we worked up for the ESF article (one that got selected for publication and one that didn’t). These versions are a little larger than the ones at ESF.

Thanks for reading and please come back soon. 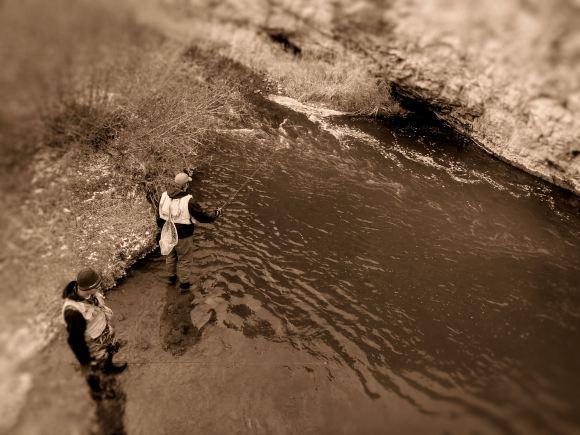 The Post In Which the Author Compares Fish To People

I nearly turned back when I realized I forgot my sunglasses, then when I saw I was low on gas, then when I saw the river was packed with anglers. But I kept driving. I drove until I saw no one, then I drove another mile.

This is my favorite time to fish. Late summer, early fall. After Labor Day, before Halloween. Just when it’s getting cooler, but far from cold. I put in downstream from a beaver pond that didn’t exist a month ago. The cows had done their best to rid the hills of vegetation, but the grass that was left appeared golden. Willows and scrub oaks guarded the river on both sides. Everything smelled dusty. There wasn’t a visible hatch, but the water rippled with takes. Around this time, it seems that fish feel some desperation.

Within a few casts, I had my first fish. A small cutthroat who’s cuts glowed hunter orange. The cutties seemed to have brightened up like the scrub oak that lines the river. The fish appeared shiftless, too, especially the young ones. They dart from hole to hole and used much more energy than needed to take bugs off the surface. My next fish came out of the water for my Adams. His mouth anchored to the fly, and his tail wheeled around like the hands of a clock and splashed into the still water.

It’s because I like cutthroats the best. Partly because they’re native. The ancestors of the fish I caught were here long before my ancestors, and I don’t mean my great-great grandpa, or even white guys. I mean humans. More than that,  they’re just my favorite.

Rainbows remind me of the Californians that came into my hometown and bought up land where I once moved irrigation pipes in alfalfa fields. They built garish mansions decorated with stuff from LL Bean and Pottery Barn. They’re charming and nice–you almost believe they belong.

You can trace your finger on the maps on the backs of brookies and they somehow lead you east. I imagine even their kids talk with Boston accents even though they’ve been west for generations.

The browns clog the once quiet trails with their ATVs. As they fly by in a cloud of dust, they throw off Mountain Dew cans and cigarette boxes.

But not cutthroats. They’re a handsome fish, with their almost bronze coloring and muddy splotches. They’re just good folk with clean, calloused hands. If a cutthroat was to date your daughter, he’d have her home on time and call you sir or ma’am.

On the way home, I pulled over and watched three older anglers wet wade. They held onto each others shoulders for stability. Their rods moved back and forth slowly. Their loops unfolded like quilts being shook out for summer storage. I waited for one of them to catch a fish, but it didn’t happen.